The Birth Of Photojournalistic Wedding Photography

We thought it would be interesting to delve into how wedding photojournalism came to be and what it really is in comparison to traditional wedding photography. With that, let’s take a little journey back in time…

Prior to the invention of the digital camera in 1975 wedding photography had been quite a cumbersome affair. Early cameras and lighting equipment were bulky and far from portable, which gave wedding photographers of the early 20th century no choice but to shoot weddings within the confines of a studio.

With World War II came a new development in photographic technology – the 35mm SLR camera, roll film and on-camera flash. Documenting events such as the war itself and weddings become much more of an outdoor activity, and those possessing the new-style cameras (mostly amateurs) were able to capture bridal couple and wedding party at the venue itself, as opposed to in a studio. It became a profitable business taking photographs at weddings and selling them to the bride and groom. The photos of this era were largely still posed and contrived, featuring cliched shots such as the ring exchange, cake-slicing and wedding party lined up in front of the church.

From this point on, and after the revolutionary invention of the world’s first digital camera by a Kodak engineer named Steve Sasson, documentary wedding photography has become a growing trend.

As it evolved and became a more sophisticated device, the digital camera has made photography a much less expensive hobby or profession giving way to the style of photography known as photojournalism.

At the end of the day, we can look at the 2 opposing styles of wedding photography in this way: 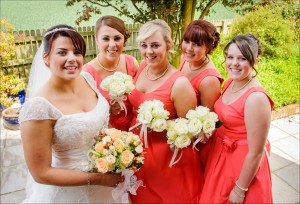 Photojournalistic wedding photography, as we discussed above, evolved after the invention of digital photography and gives way to a more ad hoc style of photography. Events and moments are captured as they happen and, oftentimes, these moments are very unpredictable and impulsive. The photographer will become an unobtrusive, behind-the-scenes accessory so that he/she can photograph events as they unravel in a very candid manner.

Both styles of photography have their benefits and it is ultimately the choice of the couple as to which style they prefer.

At Undivided Love Photography, we cater to both styles, depending on your preference, and can even provide a “mix and match” portfolio of both styles of photography for your special day!

Top 5 Venues to Get Married in Milton Keynes…and more